En The Story of the First Photo on the Web: 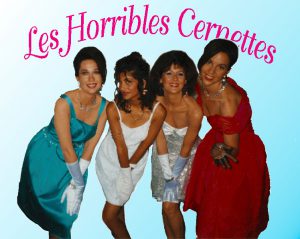 That’s the photo above—or at least, that’s what we’ve been led to believe. The composite image is a promotional shot for Les Horribles Cernettes, a particle physics parody pop band led by Michele de Gennaro, a 3D graphics artist at CERN. The photo part was taken backstage at the 1992 Hadronic Music Festival by Silvano de Gennaro, Michele’s then-boyfriend and an IT developer at CERN, with a Canon EOS 650. He later tricked out the image with those pink Cernettes graphics on the very first version of Photoshop. The comedic, nerd-girl, doo-wop band was a bit of an inside joke at the time. So de Gennaro never expected his janky album cover to change the world.

This site uses Akismet to reduce spam. Learn how your comment data is processed.