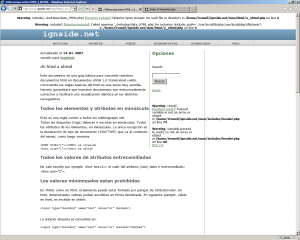 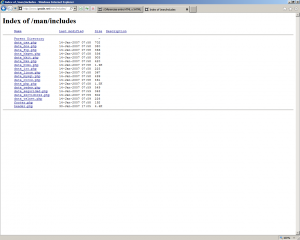 Warning: mysql_connect() [function.mysql-connect]: Too many connections in /mnt/datos/htdocs/informacion/include/class_database.php on line 183

Warning: mysql_error() expects parameter 1 to be resource, boolean given in /mnt/datos/htdocs/informacion/include/class_database.php on line 548 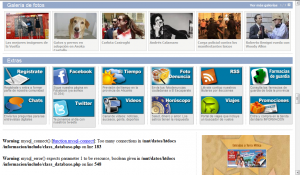 The end is in sight for the 7-year-old but still popular version 4 of PHP, open-source software that lets servers create customized Web pages such as online catalog pages or a list of search results.

“The PHP development team hereby announces that support for PHP 4 will continue until the end of this year only,” project organizers said on the PHP Web site on Friday. “We will continue to make critical security fixes available on a case-by-case basis until Aug. 8, 2008.”

The announcement came on the third anniversary of the launch of PHP 5, and project programmers said they want to focus on the upcoming PHP 6. PHP 4 was released in 2000.

“This announcement ensures the whole ecosystem moves forward together,” including those who build PHP, those who use it directly, those who employ it in higher-level applications such as Drupal or Joomla, and the Web site hosting companies that let customers use PHP, said Andi Gutmans, co-founder and co-chief technology officer of Zend, a start-up that commercializes PHP. PHP 5 “answers the challenges of building modern Web applications: Web services support, Ajax, XML, object-oriented programming.”

But retiring widely used software can be difficult, as Microsoft found when trying to end support for Windows Me and Windows NT 4. Not everybody is eager to see PHP 4 fall by the wayside.

“PHP 5 has been, from an adoption point of view, a complete flop. Most estimates place it in the single-digit percentages or at best the low teens,” Matt Mullenweg, the founder of the WordPress blogging software and site, which uses PHP, said on his blog. “Now the PHP core team seems to have decided that the boost their failing product needs is to kill off their successful one instead of asking the hard questions: What was it that made PHP 4 so successful?…Why wasn’t PHP 5 compelling to that same audience? Are the things we’re doing in PHP 6 crucial to our core audience or simply ‘good’ language problems to solve?”

In an interview Monday, Gutmans disputed the PHP 4 popularity statistics, saying that 80 percent of Zend’s customer base has already moved to PHP 5 and that the PHP community was “conservative” in choosing the date for ending PHP 4 support.

“What we find is that everyone who is doing active development has already migrated,” Gutmans said. “What’s skewing the numbers is there are lot of legacy applications on PHP 4 that just work, and nobody wants to change them.”

Yahoo and Facebook, two prominent PHP users, have moved to PHP 5, Gutmans said, in part because of better performance.

“The end-of-life date for PHP 4 inside Yahoo is much more aggressive than the public date,” said Rasmus Lerdorf, the original PHP author and now a Yahoo programmer.

Ending PHP 4 support is driven by practical necessity, Lerdorf added. “We are an open-source project with limited resources. With PHP 6 on the way, we don’t have the resources to support three different versions of PHP at the same time,” he said.

Gutmans also argued that PHP, while changing, still places a premium on being accessible. “Our foremost goal is ease of use,” though another is “expanding the language, making it more suitable to some of the new trends in the Web space like Web services and Ajax,” Gutmans said. “We constantly have to balance those. Our decision-making always leans toward ease of use.”

One reason for ending PHP 4 support is to focus on PHP 6, which Gutmans said is due in about a year.

PHP 6 features include better international abilities, in particular support for Unicode character sets that include not just Roman alphabets but also Arabic, Korean, Chinese and many others. Another feature is better security.

“Certain features we decided not to support anymore. We believe they can lead to bad security practices,” he said. “We’ll make it clear to users how to make migration easy.”