5 It was from the RAND study that the false rumor started claiming that the ARPANET was somehow related to building a network resistant to nuclear war. This was never true of the ARPANET, only the unrelated RAND study on secure voice considered nuclear war. However, the later work on Internetting did emphasize robustness and survivability, including the capability to withstand losses of large portions of the underlying networks. 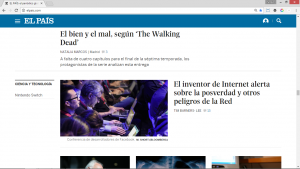 No other living person has shaped our lives more than Tim Berners-Lee. Even when Steve Jobs was alive. The personal computer had many architects. And the internet, too, was the work of dozens of scientists at the US Department of Defence going back to the Fifties. But the World Wide Web had just one creator, and he built it for neither profit nor power. The platform on which Mark Zuckerberg and Jeff Bezos have built empires was given freely to the world by an Englishman from south-west London, a modest genius who has fought to keep it free and open ever since.

In 1989, he was an Oxford-graduate physicist working at CERN (European Organisation for Nuclear Research) in Switzerland, where the world’s finest minds smash particles into each other in giant accelerators in an effort to decode the essential building blocks of the universe. Berners-Lee managed the computer systems, and he was frustrated. All these scientists had different computers that ran on incompatible programs so their data couldn’t easily be shared or linked. So, in what he describes as “an act of desperation”, he came up with the building blocks of our online universe instead — the common language of HTML, the shared information transfer protocol of HTTP and the URL conventions we know today.

What distinguishes the web among so many technological breakthroughs is it had a moral purpose from day one. While the CERN scientists focused on the smallest particles in the universe, Berners-Lee was thinking big — about making a better world. The revolution he created was no accident — the web was designed to make information free, to accelerate and democratise knowledge and solve humanity’s problems. The web was such a powerful idea that, of course, it didn’t take off at once.

Lesson three: even genius needs a sales pitch. Berners-Lee could have just surrendered his invention to the market of ideas, let others champion it if they wanted. But instead, he fought for it — he has always fought for it — often in the face of opposition and indifference. He knew that the web, like any network, would only impress if it was big, so he went out and exhorted his peers to participate. At the 1991 Hypertext conference in San Antonio, Texas, his paper proposing the web was rejected, but he went anyway, and set up a demo at the venue for passing delegates. Incredibly, they were unimpressed.