Why celebrate an International Year of Light?

Humans have always felt –and still feel– fascination for light, mainly thanks to those magnificent organs of the human body which are the eyes. Luminous phenomena such as rainbows, aurora borealis, sundogs, Fata Morgana or just the rising and the setting of the Sun still amaze us as they did our ancestors before us. The truth is that light affects every day of our lives. Clearly, the light emitted by the Sun plays a fundamental role in the development of life on Earth and it is the main source of energy for our planet. If someone asks «what do we get from the Sun?,» we immediately answer: «light and warmth» and some might even add «ultraviolet light», from which – luckily for our health– the Earth’s atmosphere protects us to a greater or lesser extent. However, they are not really three different things, but one and the same: energy in the form of electromagnetic waves with wavelengths corresponding to visible, infrared and ultraviolet radiations, which produce different effects and sensations.

On 20 December 2013, the United Nations General Assembly 68th Session proclaimed 2015 the International Year of Light and Light-based Technologies (IYL 2015) to highlight the fundamental role of light and its technologies in all human activities. Light is at the origin of life, it has inspired beauty, painters, poets, architects … and is essential to photography, cinema, theatre or television because there is no doubt that light affects the emotional response of the audience. We just need to look around us to verify that the numerous applications of light in science, engineering, architecture, medicine, communications, culture, art and leisure have revolutionized society.

The industries related to light are true economic engines and with the invention of the laser –one of the most important and versatile scientific instruments– Optics and photonics are increasingly meeting the needs of humanity in multiple aspects. They give access to information, facilitate our communications, help to preserve our cultural heritage, promote sustainable development and enhance health and social welfare. Light–based technologies are also providing new solutions to various global issues in areas such as energy, education, agriculture, environment and health. However, excessive light may sometimes have adverse consequences. Light pollution has become one of the biggest problems in developed countries since it not only affects astronomical observations –the Milky Way is no longer visible in the night sky–, but also birds, insects, turtles and other nocturnal creatures, not to mention the tremendous waste of energy involved. There is no doubt that the study of light and light–based technologies has become a cross-cutting discipline of science and technology in the 21st century. For this reason, it is essential that we be fully aware of the importance of the scientific study of light and the application of light-based technologies for sustainable global development. This requires public and private investment to develop research projects in different fields related to light and technologies. In the same way that the 20th century has sometimes been called the century of electronics, perhaps the 21st century will be known as the century of light, mainly due to the advances in optics and photonics that have taken place in the last fifty years. But, why 2015? The answer is that this year coincides with the anniversaries of a series of important milestones in the history of the science of light. One thousand years ago, in 1015, Ibn Al–Haytham published his Book of Optics. Two hundred years ago, in 1815, Fresnel developed the wave theory of light and in 1865, one hundred and fifty years ago, Maxwell proposed the electromagnetic theory of light, whereby he succeeded in unifying light, electricity and magnetism. In 1905 Einstein explained the photoelectric effect using light quanta and in 1915, one hundred years ago, Einstein showed how light was central to cosmology with his theory of general relativity, thereby confirming the fundamental role of light in space and time. Finally, we also commemorate Penzias and Wilson’s discovery of the cosmic microwave background, that eco of the origin of the Universe considered important evidence in support of the Big Bang theory, and Kao’s achievements concerning the transmission of light in fibres for optical communication, which is the basis of current optical communications, both in 1965. 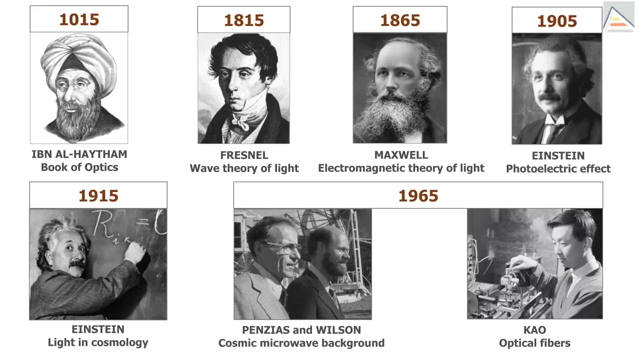 Let us not forget that Einstein, Penzias and Wilson, and Kao were awarded the Nobel Prize in Physics in 1921, 1978 and 2009, respectively, for their achievements concerning light. The celebration of all these milestones is a unique opportunity to conduct educational and outreach activities to raise public awareness of the importance of light and its technologies in our world.

for the rest of my life I will reflect on what light is.

During the year 2015, millions of people around the world will reflect on how wonderful light is and the many ways in which light and light–based technologies can improve our lives.