James Clerk Maxwell, the man who changed the world forever

150th anniversary of the electromagnetic theory of light

Maxwell is considered as one of the most important scientists of all time and one of the greats in the history of physics, along with Newton and Einstein. Undoubtedly, his more important scientific contribution is the theory of the electromagnetic field, fundamental not only for the comprehension of natural phenomena, but also for its technical application, in particular in the today ever-present field of telecommunications. He was born in Edinburgh, Scotland, on 13 June 1831 to a well-established family. Two years later, the family moved to a small country estate in Middlebie, Galloway, about 90 miles southwest of Edinburg. His father had been inherited his estate and there he enthusiastically began to supervise the construction of a new house, which he called “Glenlair.” In Glenlair James Clerk Maxwell not only spent long periods of times but also he wrote some of his more important scientific contributions. After receiving private education in Glenlair, James was sent to Edinburgh Academy, where he spent five years. In 1847 he enrolled at Edinburgh University and, three years later, he went up to the University of Cambridge, the most influential center of physics at the time, where he graduated as Second Wrangler in the Mathematical Tripos of 1854 and he won the Smith Prize the same year. In the Smith’s Prize examination, question 8 was on Stokes’ Theorem. Some years later Maxwell would use this theorem in his work on the electromagnetic field. 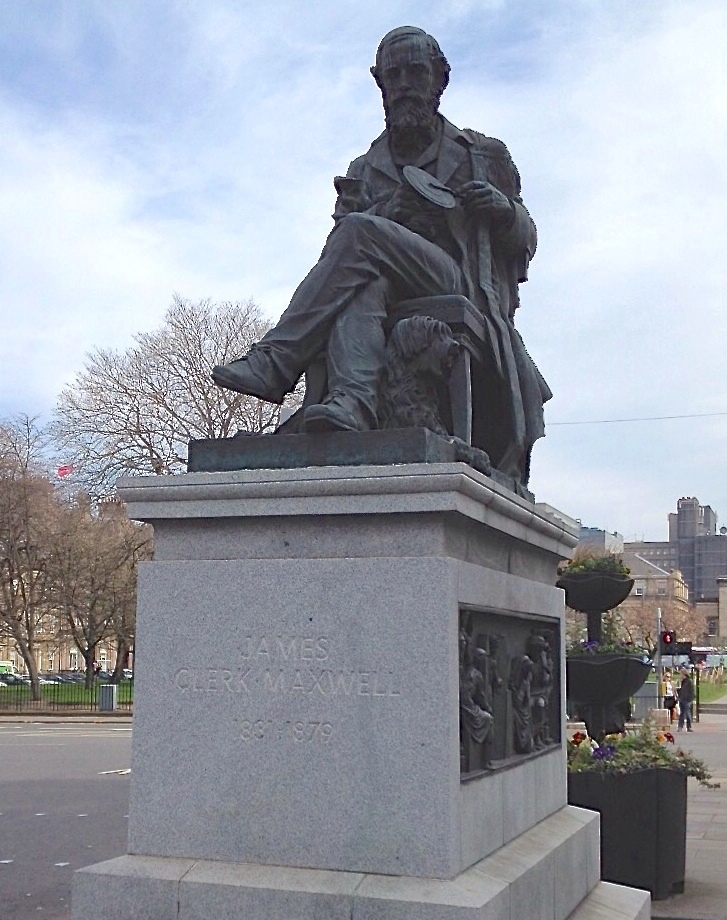 Statute James Clerk Maxwell with his dog Toby at his feet and holding his colour wheel, Edinburgh (Scotland). Credit: A. Beléndez.

In 1856, Maxwell got the Chair of Natural Philosophy at Marischal College, one of the two universities in Aberdeen at that time, where he spent four years. There he began his researches on colour theory and married Katherine Mary Dewar, daughter of the College Principal. Perhaps is less known that Maxwell was awarded the Adams Prize with an essay titled On the stability of the motion of Saturn’s rings which was published in 1859 and where he concluded that «the only system of rings which can exist is one composed of an indefinite number of unconnected particles, revolving around the planet with different velocities according to their respective distances.» Maxwell’s work about the Saturn’s rings was defined by George Airy, the Astronomer Royal, as «one of the most remarkable applications of mathematics to physics that I have ever seen.» In 1895, sixteen years after Maxwell’s death, the spectroscopic study made by the American astronomer James Keeler confirmed the theory of Maxwell that Saturn’s rings are made up of countless small objects. In 1860, he left Aberdeen to occupy another professorship in King’s College, London. The five years Maxwell spent in London were probably the most creative in his life: colour vision and gas kinetic theories as well as the dynamical theory of the electromagnetic field. There he also produced the world’s first colour photography, which was projected onto a screen at the Royal Institution in May of 1861. Maxwell was elected to the Royal Society three weeks later.

Maxwell is also one of the founders of statistical physics. In 1860 he published Illustrations of the dynamical theory of gases in which he needed only one page to obtain the distribution law of molecular speeds that bears his name. Maxwell was the first to formulate a statistical law that governs a physical phenomenon. Again, and as happened with his hypothesis of Saturn’s rings, this law also was proven experimentally in this case by the German physicist Otto Stern in 1920 using the molecular ray method.

Maxwell resigned his King’s professorship voluntarily in 1865, mid session, and went back to his Scottish estate in Glenlair. He wrote his magnus opus there, A Treatise on Electricity and Magnetism, published in 1873, two volumes of more than 500 pages each, peak of nineteenth century physics and comparable to Newton’s Principia, published almost two centuries before. In his Treatise Maxwell manages to unify all known phenomena at the moment regarding electricity and magnetism.

In 1871, Maxwell was appointed to take up the newly created Professorship of Experimental Physics at the University of Cambridge, and he became the first director of a new research centre, the Cavendish Laboratory, and became the first Cavendish Professor of Physics. Other directors who succeeded him were Lord Rayleigh, J. J. Thomson and Rutherford. To date 29 Nobel Prize winners have worked in the Cavendish Laboratory. He supervised every detail of the construction of the Laboratory. In 1877, Maxwell’s health started to fail. He passed away due to an abdominal cancer on 5 November 1879. He was 48. Before dying, one of the things that most concerned to Maxwell was the future of his wife Katherine, whom he so loved. 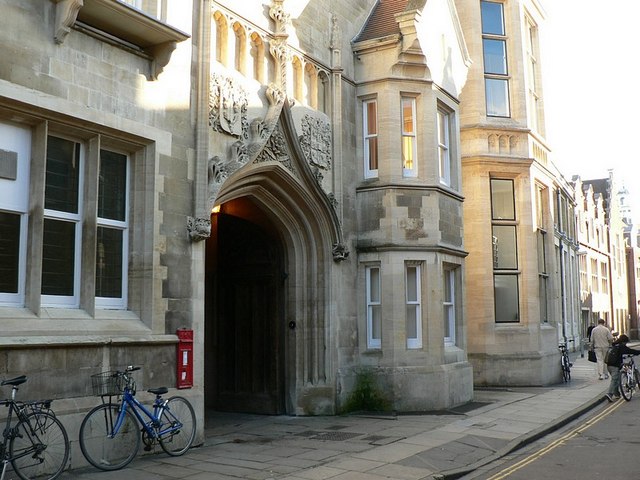 The Old Cavendish Laboratory. © Copyright Rich Tea and licensed for reuse under this Creative Commons Licence.

A Dynamical Theory of the Electromagnetic Field

Maxwell left us contributions to colour theory, optics, Saturn’s rings, statics, dynamics, solids, instruments and statistical physics. However, his most important contributions were to electromagnetism. In 1856, he published On Faraday’s lines of force; in 1861, On physical lines of force. In these two articles he provided a mathematical explanation for Faraday’s ideas on electrical and magnetic phenomena depending on the distribution of lines of force in space, definitively abandoning the classical doctrine of electrical and magnetic forces as actions at a distance. His mathematical theory included the aether, that «most subtle spirit», as Newton described it. He studied electromagnetic interactions quite naturally in the context of an omnipresent aether. Maxwell stood firm that the aether was not a hypothetical entity, but a real one and, in fact, for physicists in the nineteenth century, aether was as real as the rocks supporting the Cavendish Laboratory.

In the sixth part of his 1865 paper, «Electromagnetic Theory of Light», in which he refers to the paper titled Thoughts on Ray-vibrations published by Faraday in 1846, saying «… the electromagnetic theory of light as proposed by him, is the same in substance as that which I have begun to develop in this paper, except that in 1846 there were no data to calculate the velocity of propagation.» Maxwell also concludes that «light and magnetism are affections of the same substance, and that light is an electromagnetic disturbance propagated through the field according to electromagnetic laws.» As Arthur Zajonc pointed out in his book Catching the Light, «In this single sentence, Maxwell proposed a profound change in our image of light, one is which light, electricity, and magnetism would now, and forever after, be entwined. Two arenas of physics, which to all outward appearances have nothing in common, were to be united.» When he wrote «affections of the same substance», that substance was the ether. Although Maxwell’s mathematical formulation did not require the ether, it was still omnipresent. He proved that the equations of the electromagnetic field could combine into a wave equation and suggested the existence of electromagnetic waves. Calculating the speed of propagation of these waves, he obtained the value of the speed of light, and concluded that it was an electromagnetic wave. Einstein referred to that crucial moment of Maxwell by pointing out: «Imagine [Maxwell’s] feelings when the differential equations he had formulated proved to him that electromagnetic fields spread in the form of polarised waves, and at the speed of light! To few men in the world has such an experience been vouchsafed» Maxwell deduced that electromagnetic waves are transverse waves and he got what is now known as «Maxwell relation» between the refractive index of a medium and the square root of its dielectric constant.

In 1888, nine years after Maxwell’s death, Heinrich Hertz probed experimentally the existence of electromagnetics waves. This meant not only the confirmation of Maxwell’s theory but also a win over telegraph engineers as William Preece, Engineer-in-Chief of the British General Post Office, which denied the applicability of Maxwellian physics to engineering. If Maxwell had lived in 1901 when the Italian engineer and Nobel Prize in Physics in 1909 Guglielmo Marconi made the first transatlantic radio communication across the Atlantic ocean, from Cornwall (England) to St. John’s, in Newfoundland (Canada) –using the electromagnetic waves whose existence Maxwell had predicted in 1865– perhaps Maxwell’s fame would be far greater today.

With his work, Maxwell unified electricity, magnetism and light, which are known as «Maxwell’s synthesis.» Such a synthesis set a milestone in the history of the unification of forces that were so powerful that many nineteenth-century physicists thought the physical laws were already sufficiently comprehended. This led physicist and Nobel Prize in Physics in 1907 Albert Michelson to write in his book Light and Their Uses published in 1903: «The more important fundamental laws and facts in physical sciences have all been discovered, and these are now so firmly established that the possibility of their ever being supplanted in consequence of new discoveries is exceedingly remote … Our future discoveries must be looked for in the sixth place of decimals.» Nothing could be further from the truth. In the first years of the twentieth century there were two Kuhnian paradigm shifts in physics: Planck’s quantum theory (1900) and Einstein’s theory of special relativity (1905), both consequences of Maxwell’s electromagnetic theory and related to light, which laid the groundwork for these two revolutionary ideas. It is clear that Maxwell opened the doors for twentieth century physics.

Although Maxwell’s work on electromagnetism was essential, it had got some limitations, like trying to reconcile Newtonian mechanics and maxwellian electromagnetism. This problem was finally solved in 1905 when Einstein published his theory of special relativity. After Einstein’s works, the luminiferous aether –the focus of nineteenth century physics– was dead and buried. Even Albert Einstein recognised that his «the special theory of relativity owes its origins to Maxwell’s equations.» In 1931, at the centenary of Maxwell’s birth, in an article titled Maxwell’s influence on the development of the conception of physical reality, Einstein claimed that «one scientific epoch ended and another began with James Clerk Maxwell» and «the work of James Clerk Maxwell changed the world forever.»

Richard Feynman, Nobel Prize in Physics in 1965 for his work in quantum electrodynamics (QED), the quantum theory of the electromagnetic field, pointed out: «From a long view of the history of mankind, seen from, say, ten thousand years from now, there can be little doubt that the most significant event of the 19th century will be judged as Maxwell’s discovery of the laws of electrodynamics.»